Many of us dream about a soulmate 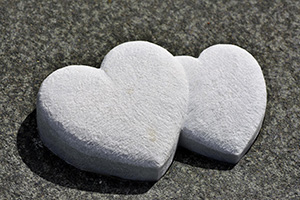 The idea of a soulmate has both conscious or unconscious elements. Even if we do not intellectually believe in soulmates, we are still affected.

Many people openly and consciously yearn for a soulmate. They may even believe one person is out there for them, that “right” person.

In Rutgers University’s 2001 National Marriage Project Survey, 94% of 20-to-29-year-olds said: “When you marry, you want your spouse to be your soul mate, first and foremost.” Another 88% said: “There is a special person, a soulmate, waiting for you out there.”

But even those who don’t believe in soulmates consciously are just as affected by a similar idea that operates unconsciously — and more powerfully. We all hold some unconscious list of notions describing an “ideal” relationship partner. Often we recite parts of this list as what we want in a partner.

But reality inevitably fails to match our ideals. And we judge and react to real people according to our ideals. As a result, many relationships that have potential are blocked, if not lost. And dissatisfaction, unhappiness and upsets are unconsciously generated.

Is the very notion of “soulmate” (conscious or unconscious) just a self-limiting fantasy — an idealization which only keeps us from ever feeling truly satisfied with a real-life human partner? Or are we not seeing a positive potential here? What I will tell you about soulmates is a paradox that goes beyond fantasies, myths, empty hopes or hype. It may get you to realize something vital about relationships, no matter what you believe about soulmates.

Day in and day out I work with couples in all situations and predicaments. In my intensive marriage retreats, I witness what builds true, lasting, and profoundly satisfying love. This is a love which sometimes fills couples when they are starting out. They say they feel just like “soulmates” — so enormous and enveloping is the love they feel.

It’s easy to feel like you are soulmates in the midst of a passionate and seemingly endless honeymoon. When you feel like soulmates at the end of a decade, something else is involved. It is not a fantasy, but a realization based on a real-world track record, already well tested by time.

The couples in my retreats often have been together for decades. Frequently they are on the brink of divorce. Yet their relationship started with such great promise, deep love and radiant hope. One wonders, what happened? More importantly, what to do now? As we know, most couples simply give up at some point.

But over the course of a couple of days of a retreat, we dive in and discover the answers to these questions. Amazing things happen. Most couples come to realize they had no idea what was unconsciously building up distress in their marriage, and what was blocking their access to ongoing shared happiness.

As a result of working together for such a short time — despite being unhappy for years — most of the couples I work with fall back in love. Often they experience a honeymoon more powerful than the first one!

Meeting a soulmate vs. becoming soulmates

I wrote a book Relationship Tools for Positive Change about what I saw with clients who struggled through their tests to find unanticipated levels of happiness together. The contents of the book reveal various tools that couples can use to transform their upsets, differences, troubles, problems and difficulties into a stronger, more solid foundation for love to flourish.

I figure this — that you don’t just meet a “soulmate” and live happily ever after, like the myth that we all would prefer to believe says. Instead, I have observed that real world soulmates become that — by growing together in certain ways and working through challenges successfully — as contrasted with how many other couples get stuck in less fulfilling, impoverished relationships.

Putting this together, the following formula occurred to me:

I define real-world soulmates as two partners who engage in overcoming challenges that test their relationship. This is not something you can forecast in advance, when you initially fall in love. So, in a real sense, whether you feel like “soulmates” or not at the start of a relationship does not tell you how you will end up a decade later.

Real-world soulmates are tempered by time, like metal by fire. Time reveals that they persistently chose to learn and grow when confronted by challenges. All relationships get tested and challenged, simply because all of us have some personal growth to do — no matter who your partner is. Soulmates are partners who actually do their growth in the face of a challenge.

Many couples start off with great hopes and dreams, are potential soulmates, but then falter when challenges arise. As a relationship coach in my intensive couples retreats, I help people learn new tools and strategies to move through challenges instead of being thrown off track.

That is the subject matter Relationship Tools for Positive Change whose subtitle is, appropriately enough: How to Transform Upsets or Issues into Opportunities to Strengthen Love. The point is that, paradoxically enough, challenges that usually throw couples off track are the very opportunities we have to strengthen our love and connection as partners — if we have the right tools to handle them well.

With today’s high rate of relationship dissatisfaction — and divorce — it’s time for major change in thinking. Regardless of intellectual beliefs, most of us unconsciously hold onto a fantasy-based soulmate myth. The danger with this soulmate ideal — whether we subscribe consciously, or unconsciously — is that in times of challenge, we usually find our real-world partner comes up short of our internal idealized, hoped-for mate. And then we, ourselves, start to think and act in ways that hurt our real-world relationship.

I find it critical to turn the myth inside-out, to create an inspiring and useful approach to longterm happiness in love.

Read about real-world soulmates and why love is not enough.