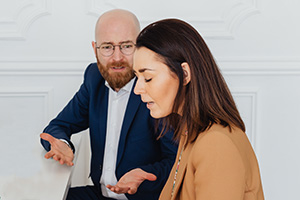 In my intensive marriage retreats, I frequently work with couples on the brink of divorce. One or both partners seem to have given up. They arrive ambivalent about staying together. Most people would wonder, “What could possibly help them now?”

But quite often, within two or three days I see an amazing turnaround! I never get tired of witnessing what seems miraculous…. As I help each partner see more clearly what has really been plaguing them, a surprising majority of times things dramatically shift.

In working with me, couples learn things they never knew. They find out what scientific research shows us to be the basis of lasting happiness in a healthy intimate partnership. Partners then understand one another better and learn tools to turn things around. And they start feeling their love for each other again.

What typically brings couples to this brink of divorce? Usually, they have triggered each other into escalating states of anxiety, anger, or shutting down into emotional numbness — and someone cannot take it anymore.

These emotions of anger, resentment, anxiety, fear, numbness, or feeling nothing are the instinctual survival states of fight, flight or freeze. These feeling states are generated by the primitive parts of our brain that operate without our permission or awareness.

There is nothing that triggers these survival states more than the threat of divorce. And so many people threaten divorce when they need things to change — but are not skilled in the tools for communicating that foster change. They use the wrong tools, and get ever worsening results.

The use of fear, threat and guilt might work for manipulating people in general. But in an intimate partnership, using these methods is a disaster. It will always make things worse. Always. But many of us were trained in these negative forms of communication in childhood and were never exposed to positive, effective and proactive models.

The threat of divorce will tend to make people act worse, not better. It sets off subcortical instinctual survival alarms. It’s like a four-alarm fire bell ringing inside our primitive brain. We get far less resourceful under survival conditions. So we act at our very worst, not our best, when our primitive survival alarm is ringing.

Thus the use of threat typically makes things even worse than they were. And what often starts as a dramatic way to emphasize one needs things to change ends up scaring each other into states of panic, rage, or numbness. Partners blow up, try to escape, or fall into an emotionally shut down state. In none of these states (fight, flight or freeze) is one capable of feeling “in love.”

Not being able to feel in love is generally the death knell of marriage. But often I have seen those feelings return surprisingly fast once couples’ primitive survival alarms calm down and they can use the tools I give them to straighten out their root issues. It’s like the sun had been covered over by dark clouds, sometimes for years. But once the clouds start to lift, the sun can be seen again — and felt again.

The point is, you never know it’s over until it is really over. So if you really want to give your marriage a fighting chance, then do the following:

Emphasize that “We both need to change how we are communicating so that we can both be happy together” and “We really need to do this together, and that is not negotiable. Us staying unhappy is not permitted. We have to change.” Be positive about your potential, and make it so.

Do you want a powerful set of tools for effective, positive communication, for healing uspet feelings and stuckness, and for overcoming destructive relationship patterns? Check out Relationship Tools for Positive Change.

If your relationship is suffering and you want a really powerful way to quickly transform it, consider attending one of my intensive marriage retreats.

As a result of most retreats, couples feel renewed hope and trust — and take home new tools they learn and continue to change their love lives for the better.