During the Coronavirus crisis we are conducting retreats via online interactive video. See our approach and the efficacy of our online work →

We highly recommend follow-up online coaching sessions in order to master the new tools, rules and understandings you acquired during your intensive retreat.

Just like weekly coaching lessons in sports, music, language or any other skill will enable mastery, weekly couples coaching sessions will enable you to practice and integrate relationship skills into your daily life.

Traditional couples therapy is also weekly, but is usually focused on putting out the “fire-of-the-week” which often limits its effectiveness. In our tool-based coaching approach, we coach you to master your tools and rules to work though issues and stay on track.

Read more about how follow-up coaching makes a crucial difference → 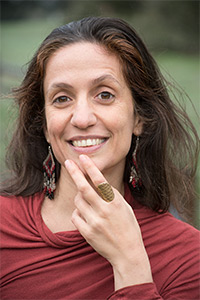 Group retreats at Healing Couples Retreats are co-lead by Hazal and John. Hazal also conducts her own special private retreats.

Hazal received her MA in Counseling Psychology from the California Institute of Integral Studies (CIIS). She also has extensive training and expertise in the Psychobiological Approach to Couple Therapy (PACT).

Having a wide range of experience, her clinical background includes working at Langley Porter Psychiatric Institute, at the Center for Empowering Refugees, at the Lomi Psychotherapy Clinic, at the Mind Therapy Clinic in Marin, and at San Quentin Prison.

In addition to her work with couples, Hazal also excels at working with individuals and groups with relationship issues. Having lived in five different countries on three continents, she is especially adept at working with cross-cultural dynamics and issues.

Hazal’s approach is informed by current neuroscience and attachment research as applied to how couples can function securely and sustain lasting satisfaction. She brings warmth, embodiment, and playfulness into her work. Read more about Hazal →

Usually, the optimal way to schedule follow-up coaching is once-per-week for the first two or three months after a retreat. Generally by that point you space the sessions out to every-other-week and once-per-month.

The typical session length is 1.5 hours. Though at first it might be closer to 2 hours, depending on the couple of course. And if there is a significantly distressing or complex situation to work though, a session length may extend slightly longer.

In any case, we do recommend using follow-up coaching right away after experiencing an intensive retreat for best results. That said, other arrangements can be made, of course.

Many couples try an “as-needed” basis, seeking coaching when there is a big fire to put out. Be aware that this is an ineffective mode of work.

We are here to help you on any basis you wish. However, know that the “as-needed” approach gets mixed results, and misses the opportunity to integrate what you learned during the retreat into a sustained transformation back home.

We have heard many clients report that they wished they had not put off regular weekly sessions following their retreat. Instead, due to the busy nature of their lives, they let things slide before they did anything.

Your own milage may vary, of course. Much depends on the nature of the stressors you encounter, plus how deeply you were able to integrate your new tools and rules during the retreat itself. Read more →