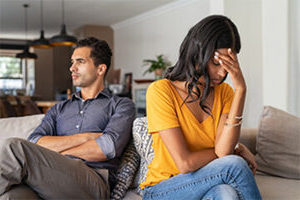 When many of us try to “work” on our relationship, how we communicate does not work at all! Instead of resolving issues, we fall into a vicious cycle, which creates even bigger problems and more upset feelings. Talking can go around in circles for hours, and never get anywhere that feels positive. Couples get stuck in a vicious cycle.

How you talk makes a difference. How you communicate is like choosing the road you take. Sadly, the road that many couples take when faced with challenges or issues leads them into a familiar downward spiral. Despite their best intentions (at least to begin with) things only accelerate downhill.

Partners go around and around a vicious cycle until they fall into what I call “the Hole” in my book Relationship Tools for Positive Change.

Every couple has their own version of the Hole. If you’ve been in a serious relationship, you know what I’m talking about. In the Hole, things just don’t work, no matter how hard you try.

Trying to solve anything in the Hole is like trying to balance spinning plates when you are fall-over drunk. Emotional reactions alter the chemistry of the body and mind just as surely as any strong intoxicant.

Talking from the Hole, partners end up saying things they later regret and perhaps didn’t even mean. The damage from the discussion about the problem can be far worse than the problem itself. Partners misunderstand one another more often than not, and further inflame the issue.

The attempt to solve things when you fall into the Hole is like trying to put a fire out by throwing gasoline on it. It is vital for partners to recognize and admit they do more damage than good when they go down the road to the Hole. Then agree to do something different!

No matter how hard you might try to “work” on things, if you’re in the Hole, you can only make matters worse. This is “work” that absolutely does not work. The coping strategies you use in the Hole are what destroy a relationship.

BLAMING: You blame your partner for causing the situation. Like, “You make me angry!” or “You ruined our entire vacation!” or “You frustrate me!”… blaming them for causing your emotions.

NAME-CALLING: You put a negative label on your partner, like “insensitive” or “selfish” or some other critical name-calling. Like, “You are uptight!” or “You’re such a slob!”

DEFENDING: You try to defend yourself or prove your partner is wrong. Like, “That’s your problem!” or “What about when you did such and such” or “You’re wrong!” or “You never do it right.”

AVOIDING: You shut down, walk out, avoid the issue, pretend it’s not important, minimize, dismiss, or simply fail to listen and understand what your partner is saying.

Research has shown that continued use of these coping strategies leads to divorce or separation. In other words, if you want to split up, communicate like this.

I ask couples, “Can you remember one time when you went into the Hole and resolved an issue in a mutually satisfactory way?”

Usually there is silence…

Then I ask, “Can you name times when you went into the Hole and things just continued to get worse?” There is no shortage of reports where upsets escalated beyond control. Things said were taken the wrong way and there didn’t seem to be any way to get through and be understood. Partners were left in an emotionally exhausted state, with even more to deal with than the original problem.

When we go into the Hole, we are being dominated by issues and emotions from the past. What we are trying to resolve has less to do with a current partner than it does with deep seated old wounds. We are most likely trying to resolve old wounds with parents or others from our past.

Yet the way we project that onto our partner now will only hurt our current love. Are you convinced yet that there is absolutely nothing that will be solved inside the Hole? Do you want to travel on a different road?

Read more about how to stop poor communication.