We've been conducting marriage retreats for over three decades.  Now our virtual retreats are even better than working in person →
Marriage Retreat » Save Your Marriage » Empty Nest Crisis & Living Like Roommates 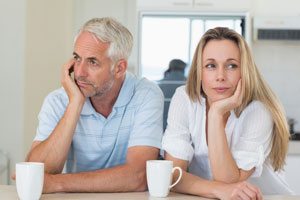 In a long term relationship, partners can end up taking each for granted. This common but unconscious process leads them to feel emotionally disconnected. After years of being stuck in this state, couples can end up feeling more like roommates than lovers.

I sometimes hear, “I love you but no longer feel in love with you.” This is the result of long term, habitual disconnection. As we explore how this happened, couples find how they each turned their attention to other things instead of each other.

Over time, a great deal of our focus and energy can get captured by other things, people, or activities. Raising the kids and performance at work are common examples of such “third things” that displace partners’ attention from each other.

At some point, because they have not actively kept their connection alive, such a couple will reach a crisis of “why are we even together?” A classic case is the empty nest syndrome. That is when a crisis occurs as the kids are about to leave home, or shortly after they do.

When such partners get faced with the prospect of being alone, they are disturbed to realize they may not even know each other anymore. They wonder if the gap can be bridged, and question whether they have outgrown each other.

Over the course of an intensive marriage retreat, we often discover how each person unconsciously — and even with the best of intentions — became over-focused on their role as a parent or as a provider. But they did this to the detriment of their most important role as being intimate partners.

Getting Sidelined by Thirds

It is common that one person may over-focus on raising the kids and the other on being a good provider. But this same crisis over feeling like roommates can occur to childless couples too. It happens whenever one person feels like they are not as important to the other as some third thing. When one over-focuses on a parent, a project, work, a hobby, friends, the kids, even an exercise regime it will leave the other feeling sidelined, as a much lower priority. Whatever the third thing is, over time, it will seem like the relationship itself has taken a back seat. Partners will be looking outward at other things more than they look at each other.

Even their patterns of eye contact change so that there is little to no face-to-face contact. The latter alone makes people feel less and less connected. Underlying discontent will grow, and given the inclination in our culture to be self-sufficient, couples will drift into even further disconnection.

Typically, neither person knows how to constructively communicate about this. Nor do they know how to rebuild a sense of connection and liveliness with each other.

Usually when they arrive at our retreat, they are operating as if in parallel lives. Each has been distracted for years by some third thing from realizing how they both suffer from an underlying sense of disconnection.

A Retreat to Reconnect

Over the course of working together, each partner is usually amazed to hear how the other suffered from a lost sense of connection. But neither knew how to address this. It is gratifying to see how couples can reconnect once they understand each other and get new communication tools to repair their rupture.

Through a series of re-connective experiences in a retreat, most partners rediscover levels of excitement and attraction they felt early in their relationship. Many report being in a second honeymoon, more profound than when they first met. They are grateful to have new tools to extend the depth of their intimate connection. I get reports years later that the strong feelings of being in love remain resilient.

In a retreat, a couple discovers what keeps love alive and fresh, and how to combat the tendency of the automatic brain to take things for granted and dull out the sense of connection.

Unfortunately, many of us were not exposed to parents who instinctively knew how to keep love alive. So we did not have the opportunity to model the behaviors and attitudes that support keeping intimacy and emotional connection vibrant.

It’s vital to learn what happy partners instinctively know, how to be in the foxhole together, as true partners and friends, and how to make each other feel special and number one in each others’ lives.

In our intensive retreats you can get tools to keep love alive and fulfilling, to feel solid and secure with each other while at the same time maximizing a your ability to share love and pleasure.

Ask About a Retreat