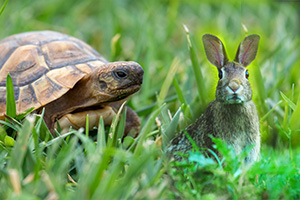 An overlooked factor that creates stress and upset between partners has to do with the differing rate at which partners process information and communicate.

This is usually due to a basic but overlooked factor. Their brains have different clock speeds. Like the fable of the tortoise and hare, some brains run faster, some run slower.

Using the dance metaphor, it’s as if the couple is trying to dance together, but they move at different speeds. One partner is doing a fast jitterbug, the other a slow waltz. Trying to dance in two completely different tempos, they step on each other’s feet.

When a speed difference exists between partners, the faster one is able to put out more words per minute and will easily run circles around the slower one. This is not an indication of superior intelligence or of being right. It is strictly a speed difference which then affects the flow of conversation.

The hare is able to quickly weave in and out of a conversation, overload the tortoises short term memory buffer, and easily interrupt the tortoise in mid-sentence to take the conversation in any direction the hare wants. This is fundamentally unfair. But more importantly, it disables both partners from fully collaborating and finding solutions that actually work for both parties.

Instead, it often feels to a tortoise as getting steamrolled and that their needs or feelings don’t matter to the hare. And, ironically, to the hare it often feels like they carry most of the weight and don’t have equal participation from their tortoise partner.

Most of the couples I’ve worked with don’t recognize when their difference in brain speeds—as manifest by speech rates—is at the root of their mutual upsets and disconnects.

Take Brad and Linda, a typical tortoise and hare combination. When I first observed them interact, Linda was doing most of the talking, often in a strident tone, while Brad hardly said anything. It was like hearing two musicians struggling to play together, but each was lost to the other, locked into a different tempo.

When I pointed out their speed difference they immediately said they recognized what I was talking about. I asked them if they ever directly addressed this tempo difference as a being major factor in their frequent and upsetting pattern of miscommunication.

They said no. But they were willing to experiment with me to see how it could change. From a neuroscience point of view, only one solution is possible. Faster brains can slow down, but slower ones cannot speed up. The same is true for two musicians each playing as fast as they can, but ending up at different speeds. The faster one has to slow down a bit and even intentionally insert some pauses to let the slower one catch up. And the slower one has to insert something into the spaces to keep pace, although it may not be quantitatively equal to the faster one.

I asked Brad and Linda to hold hands while speaking. I told Brad to slightly squeeze Linda’s hand whenever he felt her running ahead of him too far. This gave Brad a sense of control he never had in a conversation with her before. It was like having hand brakes to pause whenever he needed.

The hand holding served a double duty of calming Linda with the physical contact Brad was offering. She liked this very much and readily agreed to pause whenever Brad signaled. This created more space for Brad to jump in and participate. Even though Linda still output more words, Brad was responding in the spaces she provided. And his contribution rapidly improved qualitatively as he found his own ground in the conversation.

Interacting this way made Brad and Linda both feel more like a team, coordinating their conversational flow together. Remarkably, they starting solving their issues in a much more collaborative way. By controlling the flow of information back and forth between their brains, they discovered a new-found ability to solve issues together. Each felt more respect from and appreciation for the other.

I encouraged them to express this in their conversation. The big results of making these small moves gave them evidence that they could communicate well, as long as they paid sufficient attention to the rates in which they were each going.

Speed differences are often the root cause of poor communication and what throws couples into the Hole. And brain speed differences manifest in a variety of ways and for a number of reasons.

Many partners access feelings at different rates. Differences in speed can make it difficult for couples to solve issues. Slower partners need more time to explore, process and get to clarity about how they feel about some topic or issue. They may not be able to get in touch with their inner information in the presence of strong emotions being expressed by the other person. What helps them get to a solution is time, space and quiet. They can tolerate things not being resolved for a while. Their speech may be slow and sparse, their words carefully chosen.

Faster partners quickly express what they feel. They tend to need an immediate solution. They have a lower tolerance for things staying in an unsolved state. They may be more emotionally expressive, and put out “loud” signals. They may have a more black-and-white style of thinking. So they may overlook things the slower partner senses. Often, their speech patterns are much faster, they can easily interrupt the other and seem to hog the microphone.

Brad and Linda presented with all these differences. It caused them to polarize and lose the ability to collaborate to find mutual solutions to issues. Polarization over speed will block couples from making agreements and decisions that truly work for both of them. It will prevent them from resolving issues in a win-win manner, where both feel happy about the outcome.

Instead, one pressures the other for immediate answers. The slower partner may delay and avoid deciding anything—or give in and make a premature agreement. But since it won’t be a fully felt or thought out agreement, this can later result in foot-dragging or a failure to keep it—or doing it and feeling upset. Either way, resentments can build. This will inevitably result in conflicts.

Polarization of brain speed differences often gets worse as one partner increasingly jams the other’s brain as they get more upset. Over time, Linda sped up and Brad slowed down. Sometimes it seemed like Brad’s brain was slowed even more by serving double-duty. More and more his brain’s cycles got devoted to self-editing so as not to rock the boat or cause further upset from Linda.

Of course, that backfired and Linda was increasingly frustrated by what she believed was an intentional lack of participation on Brad’s part. He, too, was exasperated but seldom had the open space to give Linda that clear feedback. So they both got locked into a long term Reactive Cycle. One that turned out relatively simple to solve.

By directly dealing with their speed differences, many couples can quickly improve their communication and start acting like a team. It’s vital to notice any underlying differences in speed that may be at the root of poor communication, and learn to make adjustments in timing to come into better alignment with one another.

These four Polarity Dances above are quite common. They can be interlinked in various ways. For example, many partners who pursue connection also are emotionally volatile, feeling-oriented, and run fast. Partners who withdraw may also suppress feelings, stay in their heads, and run slowly. While these linkages are common enough—and often stereotypically linked to gender—other combinations are possible.