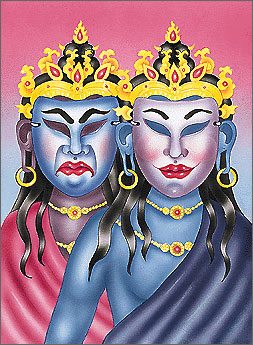 Shakespeare wrote, “All the world’s a stage, and all the men and women merely players.” We all play certain roles throughout our lives. Many were developed in childhood. We instinctively learned from parents, from teachers, even from television how to be in the world and in relationships.

We learned how to act male or female, we adopted ways to fit into our family drama, and we memorized certain scripts for being with our peer group. We may have cast ourselves in the role of performer, critic, rebel, tyrant, clown, dramatic star, intellectual, pollyanna, caregiver, conformist, mediator, devil’s advocate, the “good” child – or the “bad” one.

Most of us will unconsciously play out these scripts from childhood for the rest of our life! All roles set limitations on us. Any role will emphasize certain aspects of being human – but will neglect other aspects. The intellectual may ignore feelings. The caregiver may not pay attention to their own needs. The dramatic star may underuse their reasoning skills.

It is interesting how often partners in relationship play out complementary roles. This contrast can enrich the lives of both partners, but it can also cause problems. The limits of each partner’s role training may create friction with the other’s. Differences may evoke complaints, judgments, or conflicts.

Take a look at the stereotypic battle of the sexes, in which the man is logical, while the woman is emotional. These roles complement each other, letting him rise above feelings to work in the world, while she retains the emotional sensitivity to nurture the family at home. Unfortunately, such differences can clash and lead to problems.

For instance, when she tries to discuss her feelings, he tries to fix them, playing the role of “problem solver,” or ignore them, playing the role of “strong and silent.” What she really needs is simply to be heard and understood, but he’s too busy trying to fix or ignore her feelings to stop and just listen. At other times, she wants him to share his feelings, which goes against the role of strength he was trained to act out. Though each of them has good intentions, conflicting scripts about emotions cause them to get upset with each other.

The card ROLES invites you to move beyond the limits of role training – and the problems that arise when roles conflict. The first step is simply to accept that you and your partner are not the same. Stop trying to make them act according to your script. Find out more about their past role training, with the intention of establishing better understanding between you.

The next step might be to learn a new role yourself! Take Shakespeare’s quote to heart, and become an “understudy” of your partner’s role. Study one of their unique qualities, and integrate it into your own style. Trying something different can unblock the limits of your role training – and enable you to live your life with a richer set of options!

← Go Back to Previous Page
Roles

Shakespeare wrote, “All the world’s a stage, and all the men and women merely players.” We all play certain roles throughout our lives. Many were developed in childhood. We instinctively learned from parents, from teachers, even from television how to be in the world and in relationships. We learned how to act male or female, […]