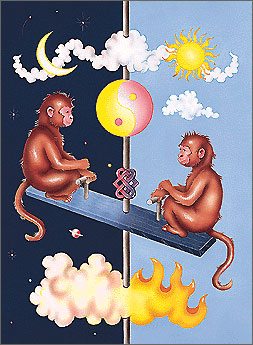 It is remarkable how often partners respond to each other in opposite extremes – like children on a seesaw. If one goes up, the other goes down. As one desires to share feelings, the other wants to be rational. One wants closeness, the other needs space. One demands commitment, the other yearns for freedom. Couples may contrast with each other in so many different ways – optimist versus pessimist, introvert/extrovert, serious/silly, dreamer/realist, energetic/calm.

Initially, partners may be attracted by their differences. But often, after some time has passed, they begin to respond to each other as if there’s something “wrong” in how they are different. Differences are then viewed as character deficits and become a source of ongoing problems and conflicts.

Consider the stereotypic battle of the sexes. Each gender was raised to follow rigid, opposite roles. A man should be strong and silent, and rise above feelings – logical ingredients for worldly success. A woman should be soft, communicative, and very feeling – emotional ingredients for nurturing the family. Each partner plays a specific role in the relationship, based on these culturally prescribed differences.

But instead of appreciating each other’s complementary gifts, partners sometimes end up devaluing each other’s styles. As they project their own role training onto each other, they polarize over how emotions should be handled. The woman wants to share feelings, while the man tries to rise above them. Each pushes the other to respond in an opposite manner. As their conflict over emotional style develops, they may start to complain that “women are irrational” or “men are cold.”

It is interesting that such partners may at times say that a relationship is a 50-50 proposition. Each may refer to their partner as “my better half.” This implies that each person is only half there. For instance, the man is there rationally, the woman, emotionally. Perhaps the other half of each can be found in their partner.

In contrast to the 50-50 view, the card POLARITIES asks you to see relating as a 100-100 proposition. Be 100 percent of who you truly are. The full human potential includes both emotions and logic, seriousness and lightness, dreaming and practicality, desires for closeness and for space, being outgoing and being reflective, moments of optimism and pessimism. We each can experience all of these and more.

What differences in styles, traits, or needs create friction in your relationship? Where do you tend to respond by opposing your partner? This card invites you to begin to recognize that differences with a partner, frustrating or uncomfortable as they may be, are actually doorways – doorways to lost parts of yourself, doorways to wholeness.

Any struggle you have over differences with a partner is usually about a struggle within yourself – between a side of you that you identify with and a side that is suppressed. If you truly want freedom from this internal struggle, then simply – and finally – accept your differences! This may take a great deal of courage, but it can be a major step to reclaiming vital parts of yourself. At the very least, it will be a step toward ending a source of unnecessary friction within your relationship.

← Go Back to Previous Page
Polarities

It is remarkable how often partners respond to each other in opposite extremes – like children on a seesaw. If one goes up, the other goes down. As one desires to share feelings, the other wants to be rational. One wants closeness, the other needs space. One demands commitment, the other yearns for freedom. Couples […]