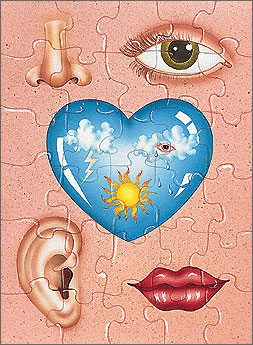 Judgments and interpretations cause some of our biggest problems in relating – yet we make them so often! In normal communication, we exchange a host of subjective opinions. We label each other, interpret each other’s actions, and judge each other’s character. In essence, these are all just personal theories – based on our way of viewing the world.

In science, a theory is quite different from a fact. If something is a fact, it is real. If it is a theory, it is speculative – and it remains debatable. So scientists carefully distinguish facts from theories. Yet in daily life, unlike in science, personal theories dominate us. Our expectations, opinions, and interpretations frequently distort how we view each other – and how we communicate.

Have you ever realized, later, that you mistook a person’s intentions or were inaccurate in judging them? Such mistakes can create problems. In the heat of emotion, we’re especially liable to have distorted ideas of each other. Reactions escalate, and the basic facts of a situation get lost.

The card FACTS asks you to pay close attention to whether you communicate facts – or subjective theories. The facts of a situation can potentially be observed and agreed upon by all parties. But theories, in the form of interpretations, opinions, and judgments, will differ for each person. Just like theories in science, they are often hotly debated.

Unfortunately, in our attempts to deal with interpersonal issues, we often fall into being judgmental or defensive. We blame each other, label each other, or state our opinions as facts. The results are not very constructive. We only inflame our problems and push potential solutions out of reach.

Like a scientist, you can benefit greatly from sticking to the actual facts of a situation. You can stop escalating problems with inflammatory judgments, personal opinions, or debatable interpretations. Instead, you can move toward understanding through discussing concrete facts. Facts are the basic pieces to the puzzle of what is really going on.

What are facts? Things that you saw or heard – that both partners can agree took place. You share facts with simple statements like “I heard you say this,” “I said that,” “I saw you do such and such.” You can also talk about your own feelings, needs, and wants as facts – as in “I felt hurt,” “I am angry,” “I need to leave for a while.”

When you use the word “I” to begin your sentences, you are better able to state simple facts you both might agree on. But when the word “you” is the subject – as in “You’re lazy,” “You made me angry,” “You were insensitive,” or “You don’t care” – the focus is on your partner. This kind of opinionated talk amounts to personal theory. Its judgmental nature puts a halt to constructive communication.

When such upsetting theories are directed at you, it may also help to become more factual. Instead of debating, ask for facts! Ask, “What did you specifically see or hear that led you to say what you just said?” By sticking to facts – rather than arguing over subjective theories – you and your partner can start to discuss a shared reality. Get the facts; it’s a necessary step for reaching clarity, understanding, and a true solution.

← Go Back to Previous Page
Facts

Judgments and interpretations cause some of our biggest problems in relating – yet we make them so often! In normal communication, we exchange a host of subjective opinions. We label each other, interpret each other’s actions, and judge each other’s character. In essence, these are all just personal theories – based on our way of […]