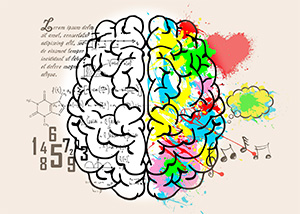 A common battle with couples comes about when one partner operates more from feeling and the other from thinking. This creates more upset over time as they try to communicate using very different brain channels. From a neuroscience point of view, they differ by which side of the brain runs their communication process.

One is more left-brain dominant and the other speaks more from their right-brain. Mind you, this does not make either of them more “right.” But it does challenge their ability to connect and understand each other — especially if they discuss a stressful topic or try to repair an upset. The way they communicate through these differing brain channels will upset them even more.

So let’s look at some of the underlying properties of right- and left-brain dominance, and what you can do about bringing more brain balance to your conversations.

Right-brain dominant people tend to be very animated and emotional in how they respond to things. They tend to follow their feelings. They want feelings involved in a relationship. They easily say what they feel and want to know what the other feels.

Left-brain dominant people rely more on logic and rationality. They may be uncomfortable with strong feelings and overt emotionality—not trust it, not want to go there. They tend to try to fix things intellectually and believe that will take care of upset feelings.

This gets played out between two partners in a Polarity Dance, where one stands on the rational foot in opposition to the other’s feeling foot. One person seems to live in the left brain, the other seems operate entirely out of the right brain.

The gender stereotype is that women are more feeling and men are more rational. I’ve seen it go the other way often enough to know it can depend more on the personality types than gender. But let’s look at a stereotypical example to see what can happen when a couple polarizes over this difference.

As a feeling-oriented person, Paula grew impatient and expressed increasing urgency to know what Brian, her more rational partner, felt. As this Polarity Dance escalated, Brian got blamed for not sharing his feelings. In actuality he could not access what he felt on demand, especially under the increasing pressure that Paula put on him, and so he just froze up more.

On the other hand, Brian would try to reason things out or fix things rationally. He did this prematurely, before Paula, due to her strong feelings, was ready to engage in logic or problem-solving. Trying his best to calm her down, he would then try to convince Paula why she shouldn’t feel so upset. Meanwhile, she would need to express and get acknowledgment of her distressed feelings before she could start to access the rational part of her brain.

Operating out of her right brain, Paula would string together a number of different things when she was expressing feelings. The right brain operates like a huge parallel processor, where lots of things interconnect. So she could be talking about one event that upset her, and that would remind her of another, and another. It helped her brain self-organize to say all of it out loud to Brian. This made sense to her right brain but Brian’s left brain functioned entirely differently. And even though Paula thought she was trying to engage in a conversation, she did not notice it was largely a one-way monologue from her to him. Nor did she usually notice his eyes begin to glaze over, or even understand why when she did notice.

Brian’s linear, logical left brain could not keep up with the string of simultaneous and tangential topics, events, issues, and complaints that Paula’s right brain would string together. For his left brain, trying to find the logical thread, it quickly became a situation of “too much information” overload. Since he was a submarine and an island, his usual reaction was to shut down, withdraw, and start to ignore.

Paula just thought Brian didn’t care and was self-centered. She had no idea she was flooding his left brain with so many things that, like a computer unable to process, it crashed.

Over time, not knowing this about each other’s brain biases, their Polarity Dance would include character assassinations aimed in both directions. This is typical. In a full-blown Polarity Dance over feeling vs. thinking, partners end up finding fault with each other. One person may be called “aloof” or “non-feeling”—while the other may be called “irrational” or “hysterical.”

Both partners miss the real point, which is that they each are stuck in half a brain—and they both have room for growth. When people are operating on all cylinders, they can access both feelings and thoughts, emotions and rationality. Integrating both sides of the brain is ultimately more resourceful.

It is vital for each of us to recognize if we are internally out of balance, leaning too heavily towards one or the other extreme. A great way to find more balance is to stop fighting and integrate a little more of your partner’s style—as uncomfortable as it might be—into your own way.

In yet another case of opposites attract, Paula and Brian were initially drawn together by how different they were. Brain was a very logical, successful lawyer, while Paula was a highly creative artist and dancer. Brian loved her animated expressiveness and the color she brought to his life. Paula was drawn to the stability, clarity and dry wit Brian showed. He was like her rock.

Yet after a few years of marriage, those very differences that attracted them became their biggest problems. Doing a Polarity Dance over their differing styles, they started seeing each other as having massive character deficits. Paula criticized Brian as “insensitive,” while he ridiculed her for being “over-emotional.”

Their different styles caused escalating levels of upset. When Paula wanted Brian to know what she was feeling, he would respond with rational explanations or his usual attempt to fix things using logic. She would try to tell him about an upsetting event in her day, and he’d jump in with analysis and advice. She would report how hurt she felt when he did something, and he’d explain the valid reasons for his behavior. A growing resentment mounted in her that her feelings didn’t seem to matter to him.

Similarly, Brian could get very enthusiastic explaining the various deals and projects he was working on, and Paula would start to act bored or even irritated. She wanted to hear about how people felt, while Brian would analyze situations, goals and action strategies. He thought she never listened to him or even cared about his work.

I saw them when they were on the verge of splitting up. They questioned whether they were fundamentally incompatible. In looking at their differences more deeply, we discovered untapped areas for growth in each of them. Doing this growth could bridge the gap that separated them.

For instance, Brian actually had many feelings. He just never realized these could ever really matter to anyone else. So he tended to stay in his head and lose access to his emotional states. This deep, unconscious pattern started in childhood. His parents left him alone crying in the crib. They thought this was good for him. Thus even before he learned words, Brian came to assume his feelings wouldn’t matter to others. Similarly, as he grew older and started to learn to speak, his parents didn’t often ask him how he felt. So he missed getting important emotional vocabulary lessons.

Once they both realized this—and what it was costing them in their relationship—Paula and Brian took a different stance. Brian became willing to explore what he was feeling, and Paula saw the opportunity to help him learn to articulate his emotional states in words. She became very patient and nurturing, a turn for the better from her previous demanding and demeaning attitudes. Brian, in turn, started turning his attention to what Paula felt.

Brian responded well to this change, and started enjoying his ability to explore and express feelings—both his and Paula’s. Their conversations deepened and became more satisfying to both of them. Interestingly, Paula simultaneously grew her in left brain capacity for reason and logic the more Brian was willing to stop and smell the roses—that is, to feel his feelings with her.